Alicante presents a more laid back and upmarket break on the Costa Blanca than its neighbours. Alicante is the second largest city in the Valencian Region. It is the capital of the southern most of the three Valencian provinces and is situated on the coast and surrounded by mountainous terrain well as beautiful beaches. With its beautiful beaches such as San Juan and Postiguet, Alicante has gone more upmarket recently with many new, exclusive eating places and bars opening up in and around the marina and the old town, (El Barrio). Alicante has theatres, cinemas, numerous restaurants, bars, and night-clubs as well as the beautiful promenade along by the marina. The city is built on two ancient Roman settlements, one of which gives the city its nickname - The City of Light. These remains are constantly being discovered during road-building and construction. There is also much remaining evidence, in the form of ruins, culture, and language, of the long occupation by the Moors. Alicante is generally known as the gateway to the Costa Blanca, as most guests to Alicante use just the airport before getting on the package tour buses to Benidorm and do not stop long enough to see what this great city has to offer. The nearby towns of Denia, Benidorm and Torrevieja are better known to the tourist to this part of Spain. However despite this, Alicante is becoming better known and has more to offer than just being a departure and arrival city. 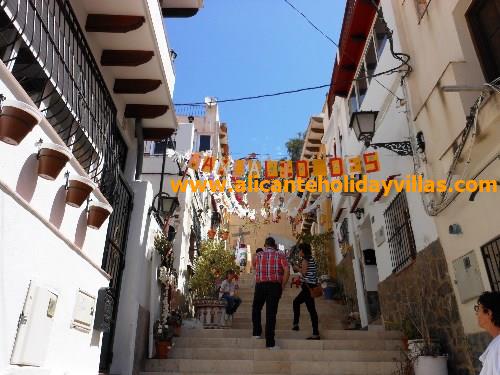 The quayside walkway meanders pleasantly past the marina and beachfront area before merging into Alicantes charming Old Quarter (Casco Antiguo) with lovely squares and churches as well as great nightlife and restaurants. Alicante offers a great base for exploration and the city itself has a tremendous tourism infrastructure, although one of the best and easiest ways to explore the Costa Blanca is by self drive.

Alicante has much to offer the tourist. Presiding over the old town is Santa Barbara castle built on an outcrop of rock overlooking the city. It is one of the largest medieval fortresses in Europe and was built in the 10th century. It has all that you would expect a castle to have cannons, dungeons, a small church and look-out towers. From the walls of the castle there are superb views over the city and along the coast. Access to the castle is by a lift, the entrance to which is through a tunnel opposite Postiguet beach. Alicante also has a second castle, San Fernando. This was built in the 19th century as part of defence against Napoleon. It proved to be of little value and was abandoned soon after. The walls are well preserved and it has an ornate doorway.

Alicante has numerous parks, green spaces and plazas or squares. The Palmeral park is just outside the city centre on the N332 towards Alicante airport and Gran Alacant. Covering an area of some 18 acres (72,000m2) it is crammed full of palm trees, shrubs, colourful plants and flowers, a boating lake and a waterfall which you can walk behind. There is an outdoor cafe, and in the summer evenings there is regular entertainment for children. Often used as a film location and for wedding photographs, on the southern outskirts of Alicante is El Palmeral Park. The park contains waterfalls (including one which you can walk behind!), lakes and hundreds of palm trees and shrubs. Take an early morning stroll in Alicante along the footpaths lined with colourful flowerbeds, or take a boat around the lake, have a snack in the kiosk, or take a picnic in the designated shady picnic areas whilst the children play in the playground. In the summer evenings, the summerhouse holds regular family entertainment, including a childrens theatre. On the slopes of Mount Tossal are a series of terraces and walkways with superb views of Alicante marina and city. This is a play park for children and the young at heart and features a bike track, a rock climbing wall and a giant chess board as just a few things to do.

The Plaza del Ayuntamiento or Town Hall Square is possibly the smartest of them all. Recently redeveloped it has a series of water fountains that change shape, size and colour throughout the day. Three sides of the square are lovely vaulted buildings offering shade from the hot sun. In the Town Hall building is the cota zero, a large brass stud set into the floor which marks zero metres above sea level and is the point from which all Spanish towns measure their height above sea level.

The centre of Alicante is undoubtedly La Explanada de Espana. Built in 1867, with over 6.5 million tiles in cream, red and black and designed by Jose Guardiola Pico who wanted it to be an ideal place to perfect the Spanish custom of the paseo or evening stroll. With the tiles depicting the waves of the Mediterranean Sea and rows of palm trees for shade it is a fantastic place to walk or just sit and watch the world go by. Stalls selling handicrafts sit side by side with pavement cafes, locals meet with friends to talk and tourists soaking up the atmosphere make La Explanada a great place to while away a couple of hours and people watch. 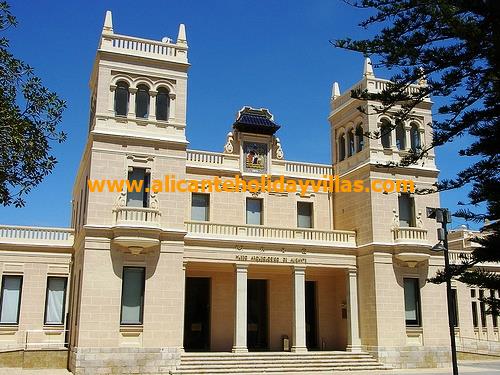 Alicante also has many museums and art galleries. Ranging from archaeology, to bull fighting to classical and modern art there is something for everyone. The Museo de Arte de Siglo XX La Asegurada is the museum of contemporary art. Housed in a building that dates from 1687 you can see paintings from Dali, Picasso, Miro, Cocteau and Bacon. Entrance is free. MARQ is the Museum of Archaeology but is not as dull as you may think. This museum was judged to be Europes best in 2004 and its superb collections are displayed and lit in a very modern way. Mubag Gravina Fine Arts Museum houses art from the 16th to 20th centuries. The dramatic building was once a palace and now 500 of Alicante Councils 2000 paintings are housed here.

In Calle Jorge Juan you can visit the oldest church in Alicante. Iglesia de Santa Maria (St Mary's Church) was built between the 14th and 16th centuries on the original site of a Mosque. Its superb white marble font and collection of art dating back to the 15th century are well worth a visit. In the heart of the old town of Alicante is the Catedral de San Nicolas (Cathedral of Saint Nicholas). Finished in the 1660s it too was built on the site of a Mosque and its blue dome towers above the warren of surrounding streets. 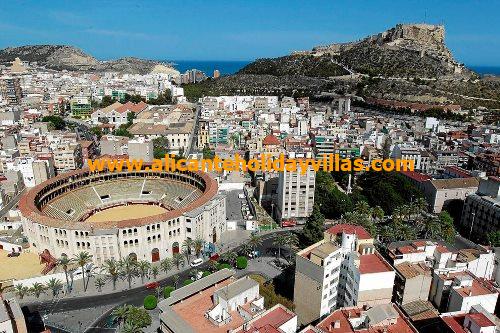 Two other highlights of Alicante are the Mercado Central (Central Market) and the Plaza de Toros (the bullring). The Mercado Central is housed over two floors in an art deco building with fish sold on one floor and meat on the other. There is also a busy daily flower market. To get an insight into the Spanish way of life, mornings are the best time to visit. The Plaza de Toros is one of the oldest in Spain, is regularly used and there is a bullfighting museum. Outside the bullring is a fantastic statue in bronze of racing bulls. On most Saturdays there is a market held here.

Alicante is full of cafes, bars and restaurants to suit all tastes and budgets. Local and international cuisine is readily available either is swish waterfront restaurants or in smaller places a bit off the beaten track. If it is full of locals, then it will be good! Tapas originated in Alicante and traditional and modern tapas with a twist are readily available. Another Spanish tradition is the menu del dia, a fixed priced lunchtime menu usually salad, bread, starter, main course, dessert and a drink from as little as 8 Euros. Remember the Spanish eat lunch late, usually from 2pm, so some restaurants may not have their menus displayed until well after 1pm. If you cannot miss your chocolate fix, then head to Valor on Alicantes famous Explanada, a chocolate lovers heaven. Try churros con chocolate for breakfast. Churros are fried dough snacks similar to donuts which you dip into thick warm chocolate. 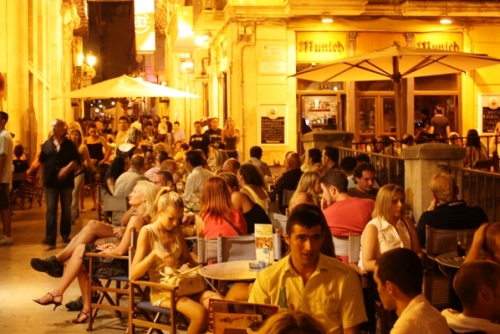 For nightlife head to the El Barrio, the old town of Alicante. It comes alive late in the evening until dawn where you will find dozens and dozens of bars, live music bars, disco pubs and tapas bars. For something more laid back head to the Explanada to sit and watch the world go by. Just off El Barrio is the Santa Cruz district, another area packed with bars and cafes. In July and August this area hosts a jazz festival. Alicante is so much more than just an airport. Try it to find out!