The Explanada in Alicante is opposite the seafront and runs parallel to the port, from the Puerta del Mar to Canalejas Park. It is one of the most popular and iconic places in Alicante and was built on the old dike during the first half of the 20th century. The Alicante Explanada consists of 6 and a half million tricolour marble tiles which form a wavy mosaic of red, black and white. In addition, it has 4 rows of shady palm trees that cover more than 500 metres in length and is a hallmark for the people of Alicante and most internationally known visual of the city. 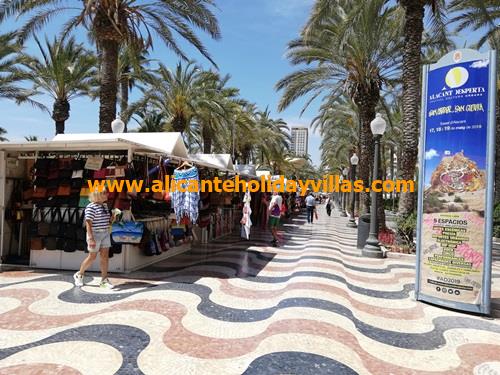 The Explanada in Alicante was renovated and restored in the 1990s. Before the Spanish Civil War, it was called Paseo de los Mártires de la Libertad. Nowadays on the Explanada are many emblematic buildings of Alicante, such as Carbonell House, the Real Casino of Alicante, the Tryp Gran Sol hotel, as well as numerous craft shops and souvenir stalls, plus the mime artists, jugglers and painters known as the 'Hippies of the Explanada'. There are also many cafes, restaurants, and ice cream parlours (all with terraces on the Explanada) which makes it a great place to ‘people watch’! Due to the beautiful palm trees, the Explanada is cool in summer and pleasant during the winter period. Many come here for a walk or to read the newspapers and drink coffee, or simply to dine al fresco. In addition there is the Concha Auditorium (so named because of its shell-like shape) which shows free musical performances throughout the year.

The Casa Carbonell, located in the Explanada, is by far the most elegant building on the seafront and was requested by a textile businessman from Alcoy named Enrique Carbonell and was built for him in the year 1925 by Alicante architect Juan Vidal Ramos as his residence in Alicante. The main entrance faces directly onto the marina and nowadays it is used for commercial premises and offices on the ground floor and mezzanine, and luxury rental apartments on the top 2 floors.