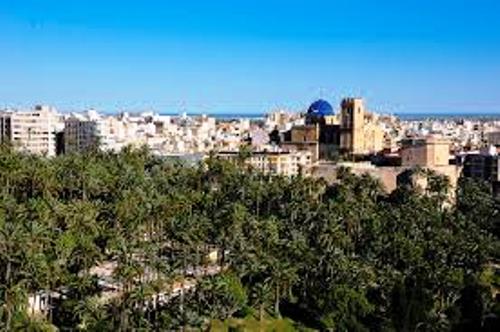 Elche is a lovely and charming city about 30km west of Gran Alacant with around 240,000 inhabitants and is the 20th largest city in Spain with a small creek called Vinalopo flowing through the city, splitting it in two parts.

The economy of Elche is based mainly on the footwear industry, with over 1,000 shoe factories and is one of the most important footwear centres in Spain. Guests of Alicante Holiday Villas receive a voucher for 10% of all shoes and handbags at one of the largest shoe factories in Elche (Salvador Artesano) 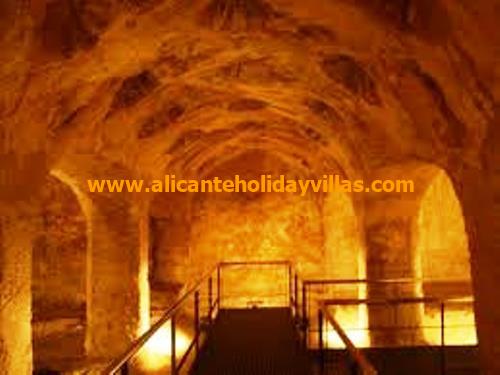 The Arab Baths in Elche were built in the 12th century and, until 1998, were a hidden treasure. Located underground in the Convent de la Merced, they are the only public baths that remain preserved. However, at the time they were built there were a high quantity of public baths as it was considered a sign of social and economic prosperity. The original aim of the Arab Baths in Elche was to purify the body before prayer (as the Koran obliges). However, after 1270, major changes were made in Elche due to the rule of the King Don Manuel told the monks of the Orden de la Merced to construct a convent over the ruins of the baths. A visit to the Arab Baths in Elche does not take long and is free. The show is usually in Spanish, however there are also French and English translations with a simple set of coloured lights explaining how the baths used to work.

Where the Basilica de Santa Maria is located was formerly the main mosque in Elche under Moorish rule. However the Muslim temple remained untouched until 1334, when it was demolished and what would become the main Catholic construction in town was built which lasted until 1492. In 1556 the first reconstruction was completed and then rebuilt in both 1672 and again in 1758. In 1784 the current building was finalised. Therefore the Basilica de Santa Maria reflects many different architectural styles (mainly ornamented, neoclassical and Italian baroque style) as the facade and the front door of San Agatangelo show.

You can discover Elche aboard the Trenet, the Elche Tourist Train. The tour takes 40 minutes, with 4 stops along the route and visits the most famous areas of Elche - the Municipal Park, part of the historical and Palm Grove Path. The train starts and finishes from in front of the Elche Tourist Office, next to City Park. 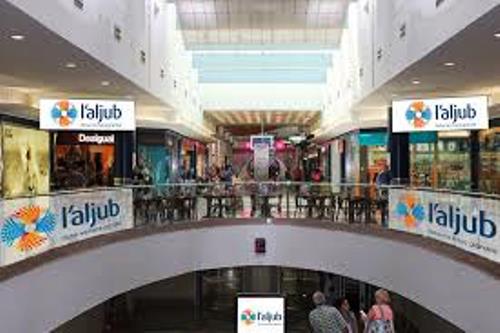 Apart from the gigantic shoe warehouses, the main shopping centre in Elche is the L'Aljub Shopping Centre, built in 2003 on over 60,000m2 space and with two floors. The L'Aljub features over 120 shops including well known high street stores such as Zara, Stradavarius, Primark, Bershka, Desigual, H and M, Massimo Dutti, Punta Roma, and Pull and Bear to name but a few. In addition there is Eroski (a large hypermarket) and the upper floor contains well known restaurants such as Foster Hollywood, McDonalds, KFC, plus a cinema, bowling alley and a childrens play area.

The Elche Mystery Play is a religious lyrical drama, dating from the 15th century, which was declared a Masterpiece of the Oral and Intangible Heritage of Humanity by UNESCO in 2002 and tells about the Dormition, Burial and Assumption of Virgin Mary. Every year in the middle of August it is played in the context of local holidays dedicated to the Assumption of the Virgin Mary. As part of this celebration on the 13th August in Elche is the Nit de L'Alba in which a city-wide night-long show of fireworks takes place. In the Museu Municipal de la Festa (Municipal Museum of the Mystery Play) part of the Mystery Play is acted and explained for visitors coming to Elche at any time of the year. The Museum is divided into 2 rooms - a space where some scale models, genuine objects and replicas are preserved and another room where a documentary is shown every 60 minutes about the Mystery Play itself.

Altamira Palace, also known as Alcazar de la Senoria, is located next to the Municipal Park in Elche. It was originally built in Almohad times (12th -13th centuries), and was later renovated with brick exterior in the 15th century. In 1913, this former fortress became a fabric plant, and it has also been used as the Town Hall and also as a prison during the Spanish Civil War,whereas today it is home to the Elche Archaeology and History Museum.

Elche Palm Park, or to give it its Spanish name, El Huerto Del Cura, which translates as The Priests Garden is a beautiful botanical garden, and just a short 15 minute drive from Gran Alacant. Within the municipal area of Elche, is the largest concentration of palm trees of almost 300,000. The 13,000m2 Huerto del Cura in the centre of Elche, was declared a National Artistic Garden and won an Award for Touristic Merit in 1964, and houses some 1,000 palm trees. Apart from palm trees, the Huerto del Cura, (which was named after a local priest Jose Castano Sanchez, who was also its owner until 1918) the gardens house many other typical Mediterranean species of orange, lemon and pomegranate trees with many species from this subtropical climate. The modern house was built in 1940, but retains the original porch featuring pillars supported by palm tree trunks. The chapel is annexed to the main house and was built in 1900 apart from the stunning altarpiece which dates from the 18th Century. Within these beautiful grounds, the Imperial Palm Tree stands behind the fruit tree area. The uniqueness of the Imperial Palm Tree is due to the fact that it has 8 trunks and is around 165 years old and weighs over 8 tons. Normally the shoots of a palm tree appear at the base of the palm tree when the tree is around 12 years old, but with the Imperial Palm, this happened when it was around 30 years old and at the very unusual height of around 2m above the base of the tree, making it a huge candelabra shape. Also within the Huerto del Cura, is an amazing rock garden which features around 40 different types of cacti and succulent plants. In addition there are pools and streams which create a calming and serene effect to the area. Juan Orts Romain, who owned the Huerto from 1940-1958, was an expert on Elche, its palm trees and the Mystery Play (more details of which can be found on our fiestas page and it was thanks to his efforts that, in 1953, the Huerto del Cura was given the National Artistic Garden Award.